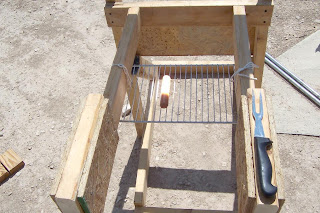 Yesterday I finally got the sun to try out the JAJFLC or John And Julianne's Fresnel Lenses Cooker, but the focus point John had built in caused it to cook very slowly. Matter of fact it would have probably taken hours to cook the 4 hot dogs it was setup for because the area just wasn't hot enough. Of course the wind blowing across the hot dogs probably didn't help any. I jury rigged my rack so that I could cook one hot dog at a time by cutting it in half and placing the two pieces side by side. Still took about 45 minutes to cook me two hot dogs. 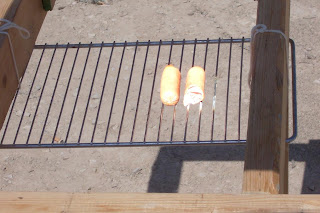 Cooking two haves of a dog here. While I was doing this yesterday a large fly decided to sample the dogs. It never had a chance to tough down before it decided that wasn't the place to be. I almost had fried fly to go with my dogs. 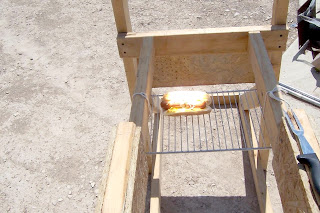 This morning I modifies the design a little and it took about 12 minutes each to do a full hot dog cut in half and I had two hot dogs for lunch again. I cooked and ate the first one while the second one was cooking. It got a little too well done on one side, but I like them like that. The second one I brought in to eat and then fired up this computer to check email and forgot about the cooker until I started to smell wood smoke. The sun had shifted enough in that short time to where the focus was starting to hit the wooden frame and it was close to igniting the wood by the time I got back out there to stop the process. Whew! Needless to say the lens is covered again now. While I was trying to get the right focus for cooking I threw the t-shirt across the rack so I could get an idea of how big the focus area was. At that time it was almost at full focus and it instantly burned a hole in the shirt before I could get it off.

Looks like using the laser at the party was really the only way to fly though because in the time it would have taken to cook all the hot dogs that were eaten at the party there would have still been a line of people standing out there waiting on their first hot dog. I don't see a future for cookers this small to be used to cook large quantities of food, but its fun to play with and cooking for a couple or three people could be done. If the lenses were about 4 times as large then it might have a future at a party. I had a chance to get a lense that large someone had left at the legion some time back, but at the time I didn't snap to how it could be used and by the time I did someone else had already gotten it. :(

Those type lenses are used in the old rear projection TVs so if you see one setting by the curb to be hauled off it would be well worth the effort to remove the lens! 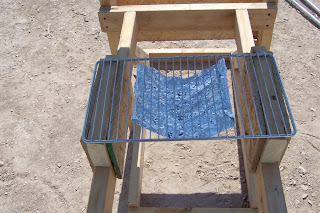 I made sort of a solar oven type deal out of aluminum foil and connected it to the under side of the grill to reflect any night not blocked by the hot dogs back to the underside of the dogs. I crinkled the foil so it would give wider dispersion of the light. 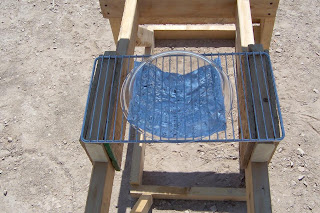 Then I used a Pyrex pie dish I had laying around to cover the dogs. 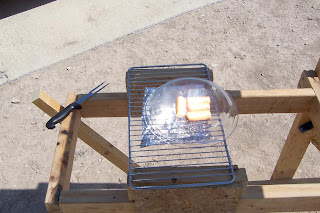 I'd moved the rack up and to a position that would allow the 4 half dogs to be covered with the light and tried this out on my last two hot dogs. Thanks goodness because I'm burned out on hot dogs after eating two a day for the last 4 days!

The focused light would have been a little cooler than on the other experiment yesterday, but the dogs still took about 20 minutes to cook. Perhaps they would have cooked quicker, but the hot dogs kept steaming and fogging up the bottom of the dish. At any rate I'm finished modifying the cooker and am calling it finished.