I'd been wanting to sight in my old Mosin–Nagant sniper rifle for a good while, but yesterday I actually started the process. Got a pretty sore shoulder today because of it, but no bruising. 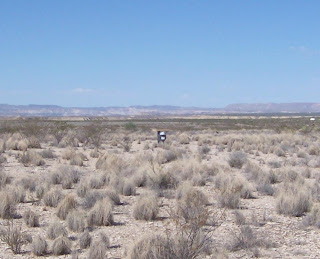 I took one of the 20 gallon plastic water jugs, filled it about 1/3 of the way up with rocks and dirt (The wind won't blow it away!) and then screwed a platform down on top of it to make a shooting platform. A folding lawn chair is the perfect height for shooting from it. 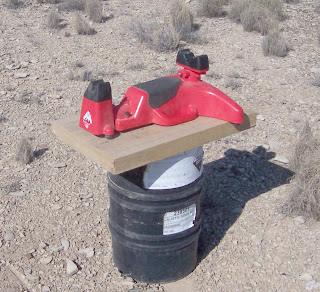 I use the sighting platform on loan from my neighbor to cradle the rifle while sighting it in. 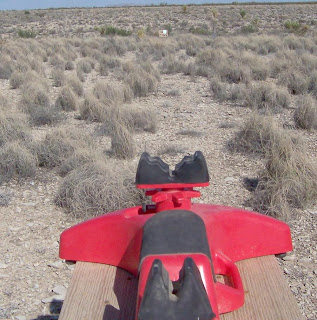 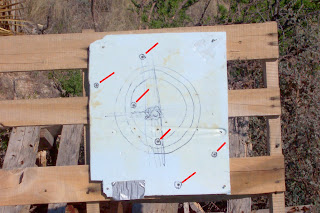 I shot a total of 8 rounds and the first three were needed just to figure out how to get it on the target. The sites are perfect horizontally, but it shoots high and the site is set to shoot as low as it will go. Looks like I'm going to have to do some modifications to get that corrected. The 6 hits you see were while I was trying to get the elevation correct using Kentucky Windage. Or in other words knowing how far down, up, left or right the bullet will go and shooting either up, down, left or right to get it to hit where you want it to.

This was using the old battle field sights and that's a far cry from using a scope. Not likely I'll ever add a scope so the trick will be for me to get used to using the battle field site and get the group as small as I can. Where we usually shoot from is the tall yucca to the right of the target. I was shooting from another hundred or so feet away from that.

Just measured and that was a 239 foot shoot. 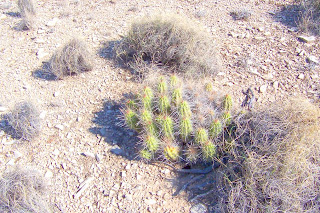 Found several more Strawberry cactus while out doing all of this so if and when they ever bloom again then that'll give me considerable more fruit. (Provided I beat the birds and rodents to it.) Unfortunately this year all they've done is bloom, but they didn't put on fruit under the blooms or at least the fruit was too small to do any good with.
Posted by tffnguy at 11:58 AM