There was a thread a while back about the wind blowing the door in this trailer shut and breaking the glass in it. I had intended to get some Plexiglas the last trip to Alpine, but after the fiasco with the border patrol I forgot half the stuff I planned on getting because of being PO'ed about that. Well I need to blame my forgetfulness on someone beside myself and the border patrol will do fine.  Anyway... I had an old mat that used to be used for a desk chair to be rolled around on. (Office type) so decided to cut a piece out of it the same size as the glass that was in it before it got broke. For now that's what I am replacing the glass with so as to get rid of the tape and tarp material over the hole and make it a little more secure and water proof to. 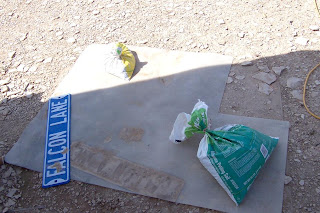 I think its probably made out of Lexan and has a rough texture something like the glass that got broken did so its opaque pretty much like that glass to. 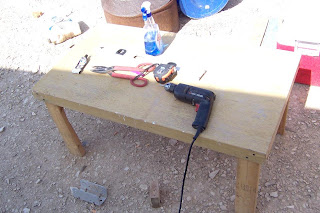 Shown here is the tools used to do the trick with. The tin snips cut it just fine without breaking it which is one reason I think its was made out of Lexan. Plexiglas would have broken if cut like that. (Don't ask me how I know) I didn't have to worry about cutting the circular corners because the glass that got broken was also square and only the window frame has circular corners. 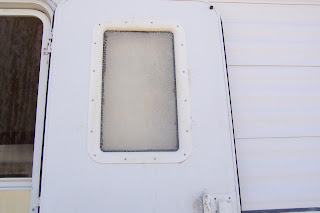 Used the only silicone I had to caulk it and it was black automotive silicone, but should hold up fine and If  I replace it later the silicone should come off pretty easy.

On the first post someone said when changing a window in an RV you just about needed four hands. Wasn't the case here because the outside part of the frame was taped to the door so it didn't try to fall out when I unscrewed all the screws from the inside. Once I got the inside frame off I caulked around the surface the glass is supposed to rest on and placed the new window material in it. Then I just replaced all the screws. Easy as pie.