Grub Shack Get Together

Went to a dinner at the Grub Shack this afternoon. I was the first there and think I was also the first to leave. (In one of my antisocial moods today) Anyway the dinner consisted of Eva's fantastic Lazania, a salad and bread sticks and some of her home baked cookies (Which were also great) Music was to be provided by Nick on the guitar and Julianne on the banjo. 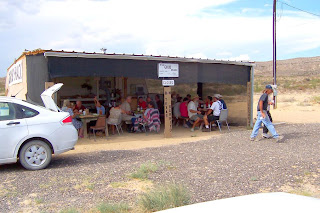 Doesn't look like many people there yet, but after I left and paid the next to last payment on the tank and drove back by there it looked like a lot more people had arrived. I swung by the legion on the way home to get ice and it was closed with a sign on the door saying to go to the Grub Shack to support Jerry and Ava so no ice for tonight. I think I can get by though.

It was sprinkling here when I left to go to the Grub Shack, but I ran out of it on the way and no sign of it there. It couldn't have done it long here. Guess I should have went back and hung out there, but like I said I was in an antisocial mood, needing a shower and will kick back here after I take a shower. Looks like I'll be taking Frann and Denese to Alpine early in the morning for them to catch their train. Sure hope we don't have a blowout going or me have one coming back. I'll try to find a tire while I'm there.

And a Falcon in a music Video
http://youtu.be/fTqra4YSsaM
Posted by tffnguy at 6:29 PM