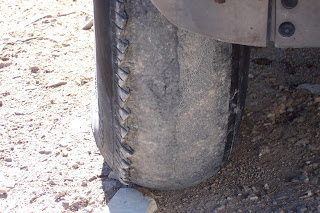 We had sort of a Pizza party at the Long Draw Pizza place last night. Frann, Denese, Tyra and I were there. I'd invited John Wells, Neal, Neil's son and Paul to join us, but they chose to eat at the Starlight instead. However, my neighbors down the road from me (the ones that left the booze) Robert, Lanette (Sp?) and Brandy  showed up and surprised us and another near neighbor showed up to so it wasn't a total loss.

Anyway on the way home last night I heard a loud noise coming from the passenger's side front followed by a severe pull to the right. I managed to keep it straight and then everything went back to normal. Since it was almost dark and the jeep wasn't acting like it had a flat I continued driving on home. When I got home I got the flashlight and found the above. Somewhere back down 118 there's a road gator from that tire. The whole tread had slung off and that was what I'd heard and felt. Amazingly enough the tire was still up and is still up now, but I need to get out there and put the spare on. I'll probably do that before it gets too hot. 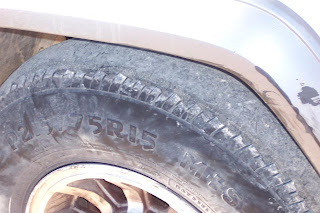 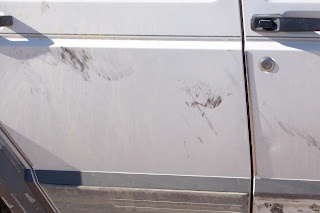 Note the black marks down the side where the road gator hit on its way out. I'd call myself lucky because I have seen tires do that and totally destroy a fender in the process, but I didn't find any damage to the fender at all. Looks like I'll have to buy a can of polishing compound to get rid of the black marks. I was supposed to take Frann and Denese to Alpine on the 9th to catch an Amtrak to Houston and had intended to go from there to Odessa. Looks like those plans are dashed because there isn't enough in the budget for a new tire and to do that to. 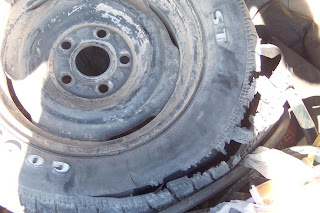 Now... yesterday I opened the trunk of the falcon to get some tools out and found that the spare in there had blown out just laying in the trunk. :( Must have happened while I was gone at some time or another because I never heard it happen and don't have a clue when it happened. So now I've got two vehicles and no spare for either. That seems to happen a lot down here.

BTW while  we were at the porch at the ghost town yesterday afternoon before heading to the pizza place the thermometer in the shade there said 118 degrees.
Posted by tffnguy at 10:35 AM