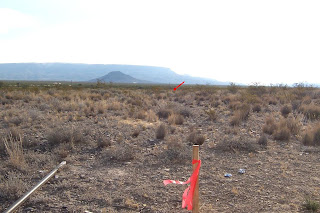 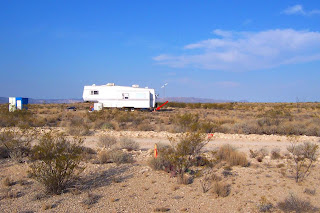 The guy from Big Bend Telephone made it out early yesterday morning and said I had everything I needed to get the phone and DSL installed. He took pictures of the wind genny, solar panels, gas powered charger, battery bank, RV and It'll Du. I suppose the last was proof of a permanent structure? ;) He also put up  wooden stakes where the pedestal is supposed to be placed and one across the road where it should be run from. He also went to the trouble to do the same between here and the legion and at the legion to so... I assume that means I'll get it installed within the next 90 days? That isn't necessarily true though because they have done that in other places where they later said they wouldn't install it. I'll keep updating as this unfolds. If they do it then I suppose I'll be getting a second driveway out of the deal (If they do like they did with John Wells) since they will be coming straight across from the road to the RV. That should make it easy to use it and the other one as a circle driveway which I don't have a problem with at all.


Family news goes like this:
Some of you may remember my Nephew the retired Colonel I posted about some time back. Well his youngest sister just died and considering his mother died just before his retirement I'm sure this is a double whammy for him. I went through a similar experience several years ago and it was really bad.

Paula is still hanging in there and Dale is still waiting to find out how they will treat him.

As for me... I have a tooth ache from HELL that is really making life rough right now. Two different types of tooth ache medicine doesn't seem to be helping at all and neither does eating Advil like candy. I think its time to get DRUNK!

As for weather? Well it was windy as heck all night and still is now. That's actually good for me though because its partly cloudy and hazy so the wind genny is taking up the slack that the solar panels are loosing.
Posted by tffnguy at 12:28 PM