No! Not this kind. 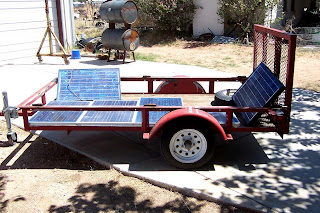 The treasure kind. More solar panels. (Again from my nephew) 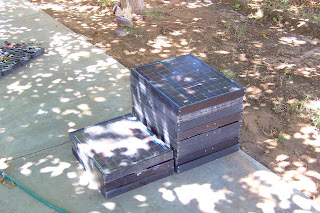 And more panels. With more on the way. The two pictures above represent 530 watts so that will put me over 1KW once these are wired in. Should open up the way for a medium sized chest freezer when I can get one. I figure I can freeze jugs of water and use them in an ice chest for a fridge so as to have a usable fridge and plenty of freezer storage. It will also do away with the need for me to have to reposition the panels twice a day since there will be plenty of power all day long even on cloudy and winter days. 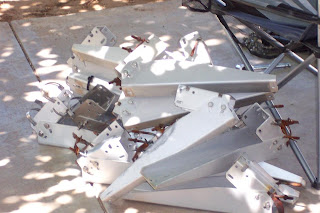 More panel mounts which I won't be using for that. I'm figuring I can use them as gable trusses for a small cabin or something like that. 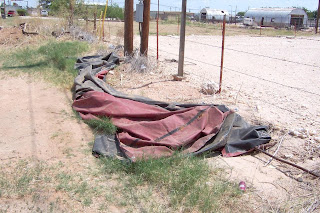 A trucker's tarp. I think this sucker must weigh a couple of hundred pounds. I've already thought of several uses for it. (Ring) Some know him as RN. 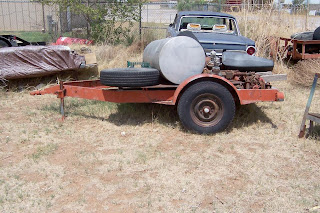 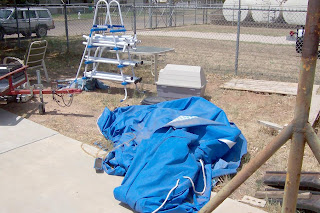 Also lots of pallets from my younger sister's boss and some 5 gallon water bottles from my older sister. Don't ask me how I'm going to get it all down south, but the panels, tarp, a few pallets and water jugs will probably make the trip this time.


I headed for Odessa last Friday and brought the trailer. Needed to take care of some VA business so I can start using the clinic in Fort Stockton and I brought the trailer specifically to haul a free 8 foot satellite dish back on. It had been laying around for just about ever, but it turned out that someone else hauled it off a few days before I got here. At first I thought I brought the trailer for nothing, but that turned out to be a good thing after all!
I'll be headed back to HELL shortly. 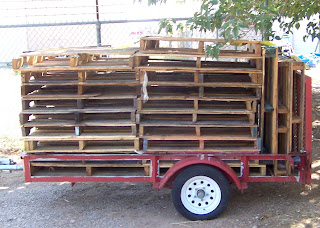 Managed to get all of the pallets on the trailer. (22 of them) I did a Google search on the "Average weight of wooden pallets and that came up as Killograms so had to search for a kilogram to pound calculator. I'm sure these aren't the heaviest pallets, but they aren't light either so I split the difference to come up with a ballpark weight of all of them. That came out to 40 pounds per pallet and a total of 880 pounds on the trailer. The weight limit is 1000 lbs so it looks like I'll be hauling them all back and will have another hundred pounds to play with on the trailer. I have all of the solar panels shown in the pictures above in the back of the jeep with the back seat down and can probably get the trucker's tarp back there to. All depending on what else I try to haul back I may have to strap some stuff on top of the jeep, but you can bet there will be a load on the whole rig! I'll probably add more pictures as I go. I plan to pull out early in the morning to head back to Hell.