Border Patrol Antics or (I got searched), Tire 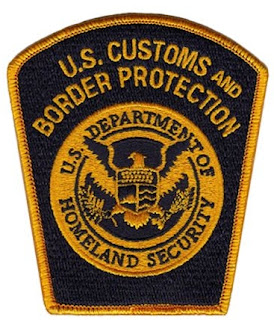 I was wondering when it was going to happen to me / Us after my neighbor and his 16 year old daughter were singled out and harassed by the border patrol about a month ago. Welp... It happened this morning on the way in to Alpine to take Frann and Denese to catch the Amtrak. First I was asked if we were US citizens and I said Yes. Then I was ask if we live in Terlingua. My answer was again Yes. Then I was asked how long I'd lived down here and I told him 2 years. Next he asked if we had gotten any rain lately and I said yes we got sprinkles yesterday.

Next thing I know we were told to roll up all of the windows and exit the vehicle. We did and then I was asked if I had any Knives?? or weapons on me and my answer was NO. Keep in mind that the dog did NOT alert on the vehicle. We were then told to go over to a metal bench with an expanded metal seat and sit down. It was in the sun of course. There were a couple of chairs there and  Frann and Denese moved them over to the shade and sat down. Nothing was said about that, but one officer stood to the side of us while a couple more were to the other side and one with a dog began tapping in different places on the jeep. The dog would jump up to where he had tapped. Next he opened the driver's door and let the dog in. It went through the whole vehicle both front and back and didn't alert anywhere. He got the dog out and went to the back opening the back hatch and put the dog back in there. It had already been there. Again it didn't alert!

Next he pulled Denese's bags and belongings out of the back seat where she had been sitting and then put them on the ground for the dog to sniff out and he searched the bag and her purse. Again the dog did NOT alert. The dog was lead around to each of us and again didn't alert to any of us. Next one officer walked up to me and told me to stand up so I did. He then said he was going to search me for weapons so I said What ever. Woo Hoo! Never been through that before. Can't say that I liked it at all either. After that Denese's stuff was put back in the jeep and we were told we could go. I call this BS how about you?

I was so pissed about that I almost forgot. 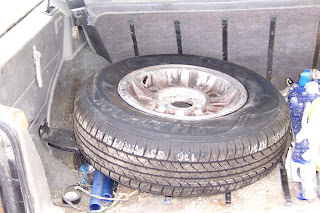 Got a new tire at Oasis Tire in Alpine. I asked about a used one and they didn't have one the size I needed so I priced a new one. Total was $97.38 mounted, balanced and included Tax. I doubt that I could have gotten one cheaper in Odessa at Walmart so I got it. Frann and Denese each kicked in $20 on the tire so it just cost me .$57.38. On top of that Denese sprang for lunch and paid for enough gas for the trip up there and back. Now If I'd known that were going to happen I'd have packed a bag and headed for Odessa, but I didn't so here I am. I won't gripe though.

Below is another one of the huge whirlwinds we have down here. That house you see out there is a house with an airplane hanger beside it so that should give you an idea of how big that whirlwind is. 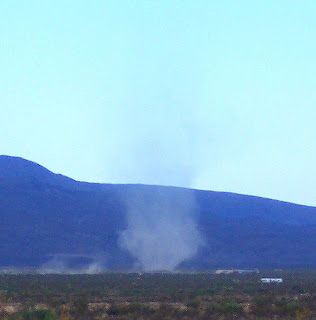 Just had a brief rain storm and got another 1/10th of rain out of it. Sure was a relief because it was a damn hot and humid day with very little breeze at all. It cooled down from 105 in here to 95 pretty quick and is now at 92. See the picture of the rain coming below. It was coming from WAY UP THERE! 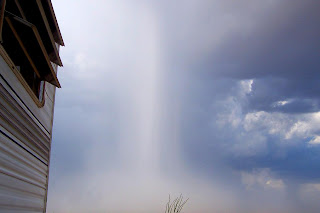