Ever had someone assume that they knew better than you where something of yours belonged? Did they? Reason I asked is last Sunday when Frann, Denese and the other neighbor came over here from the Grub Shack and while I wasn't watching someone moved a chain I had laying on the ground. I assume who ever done it assumed that is wasn't supposed to be there so they took it upon themselves to put it where they assumed it should be. 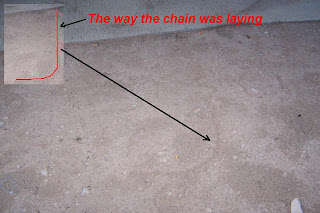 The picture above shows the imprint of where the chain had been laying before it was moved and the red drawing shows how the chain was laying before it was moved. Now the chain wasn't laying in that position just because I chunked it down there like it was laying. It was a marker so I'd know when to stop the falcon when I drove up on the carped driveway without running off the end of it. No harm done because I can always move it back. I mean the imprint is still there. 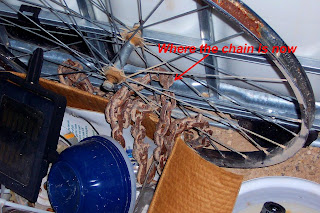 The picture above shows where it wound up. Note the rim (which I plan to make a wind generator out of). Well it was laying down on top of that box to keep those plastic bowels and other stuff from blowing out and away. Which ever culprit did it had to have dropped the chain on the rim and then stood the rim up against the water tank. I guess they also assumed that a bicycle rim should be standing up and not laying down???

Ever had someone use your computer and assume that you must not know anything about computers or the desktop would look exactly like theirs? So... they change it to look exactly like theirs all the time thinking you would be so glad they did it for you. Kids and young adults are real bad about that and even some older folks are to.


What is it about human nature that makes people assume even though their assumptions are often very wrong?


BTW Yes I have assumed the wrong things many times in my life to.